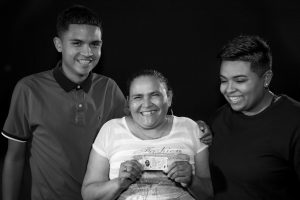 d to the United States from El Salvador more than 29 years ago, escaping the civil war that plagued the country from 1980 to 1992. When Silvia first arrived  in 1989, she began the arduous process of applying for asylum and later for a green card under a special law called the Nicaraguan Adjustment and Central American Relief Act (NACARA).

“In my first year in the United States I felt bad. I missed my family – my parents and siblings. But I knew it was better here.”

Slowly, things began to improve for Silvia. She started building a life and a family in Northern Virginia. In her heart, there was no better place to raise two daughters and a son than in the United States.

“When you have children, you start to think differently. I must keep going so that they can have a better life. They can be someone here. They have opportunity.”

18 years after she arrived, immigration officials finally interviewed Silvia regarding her asylum and green card applications. Both applications were denied and deportation proceedings were initiated against her. Frantic, she consulted with a friend who had heard of Ayuda.

“Thanks be to God, I found Ayuda. And thanks to Ayuda for supporting me and helping me move forward.”

Ayuda assisted Silvia in obtaining Temporary Protected Status (TPS). After Silvia obtained TPS, Ayuda represented her in immigration court and convinced the judge to close her deportation proceedings. From then on, Silvia worked exclusively with Ayuda on all her immigration matters, including multiple renewals of her TPS, an application to travel to see her elderly parents in El Salvador, and a family petition, filed for Silvia by her adult U.S. citizen daughter.

In December 2017, after 28 years, Silvia successfully obtain her green card and she is now a permanent resident.

“I’ve fought so hard to get here and Ayuda has helped me every step of the way. I now have my green card, which brings me so much joy. It was the happiest day of my life. I cried and cried, but they are tears of great happiness.”

Silvia is proud to be a resident and carries her green card proudly. She continues to live and work in Northern Virginia. Both of her daughters are working full-time jobs. Her son plays on the soccer team at Marymount College. Her grandchildren are in school.

“None of this would be possible without Ayuda. My message to other immigrants [like me] is to trust in Ayuda. If you put your trust in anything, it should be in Ayuda. They change lives.”